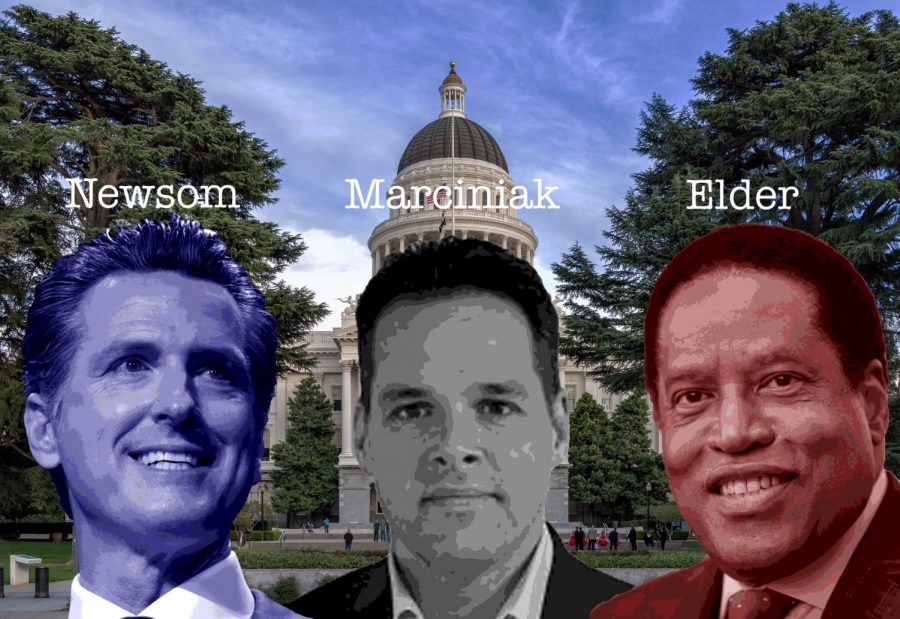 California held its gubernatorial recall election on Sept. 14 to determine whether or not incumbent Gov. Gavin Newsom should be replaced. Newsom won in a landslide, as 61.97% of Californians voted not to replace him. The election was the result of a February petition, which criticized his administration and coincided with the beginning of the COVID-19 pandemic. Overall, it cost the state $300 million, according to the Los Angeles Times.
Several prominent candidates ran opposed to Newsom. Notably, Larry Elder, an eminent black Republican talk radio host, placed first among the candidates who would have replaced Newsom, with 48.4% of the vote. Other notable candidates included Democrat Kevin Praffath, a real estate broker and landlord; and Republican Kevin Falcouner, the former San Diego mayor.
Harvard-Westlake (HW) students had diverse opinions on the election, but were generally supportive of Newsom and opposed to the recall.
“I think it was a waste of money…Gavin Newsom in general has been very good,” Adrian Drouin ’26 said. “Of course, he made that mistake of going out to dinner during the pandemic while we were under lockdown. That isn’t cool, but compared to the people that are against him, he’s a saint.”
“I mean I don’t want to know what would have happened if Larry Elder won,” Noah Koo ’27 said. “Without the mask requirements and such it wouldn’t have been good for California. Although Newsom is corrupt and not the best governor, he at least has these COVID-19 policies to keep us safer.”
“I do not support the recall of Gavin Newsom,” Jack Smith ’27 said. “I feel it would have disastrous effects on his policies and the good he has done so far…”
A large number of students criticized the recall process itself, arguing it to be excessively complicated and counterintuitive.
Jasmine Sorgen ’25 levied several criticisms of the recall system, arguing its rules were undemocratic and gave an unfair advantage to the candidates challenging the incumbent.

“The way they work now is completely absurd,” Sorgen said. “Even if Newsom had 49% of the public’s approval, and there were 50 candidates who were running for the recall and they all got 1% except for one person who has 2%, Newsom would be replaced.”
“While the California recall policy does help to maintain democracy,” Tess Rosenfeld ’25 said, “it also has some kinks to allow someone to become an elected official who does not have the support of the majority of the population of California, therefore making it a conflicted process.”
However, despite the general support for Newsom, several students favored his recall.
“I supported the recall because I thought that Gavin Newsom’s COVID-19 response was actually detrimental for our economy,” Maya Karsh ’25 said. “It was very hypocritical of him to go the bourgeoise French Laundry the night after he put us all in lockdown.”
“I think that we would certainly have a lot more room in our budget to have a recall election and actually support the democratic process if Gavin Newsom didn’t allow for so much economic failure,” Karsh said, in response to the high monetary price of the election.
In a campus-wide poll of students that asked which candidate they supported in the recall election, roughly 97% of responses, of around 150 total, expressed approval for Jeremeiah “Jeremy” Marciniak, an obscure nonpartisan candidate who received only 2,656 votes in the statewide election. However, since there was no limit to the number of responses per email address, it is possible that Marciniak’s support in the poll was artificially inflated through fraudulent responses. Marciniak’s campaign did not respond to a request for comment.