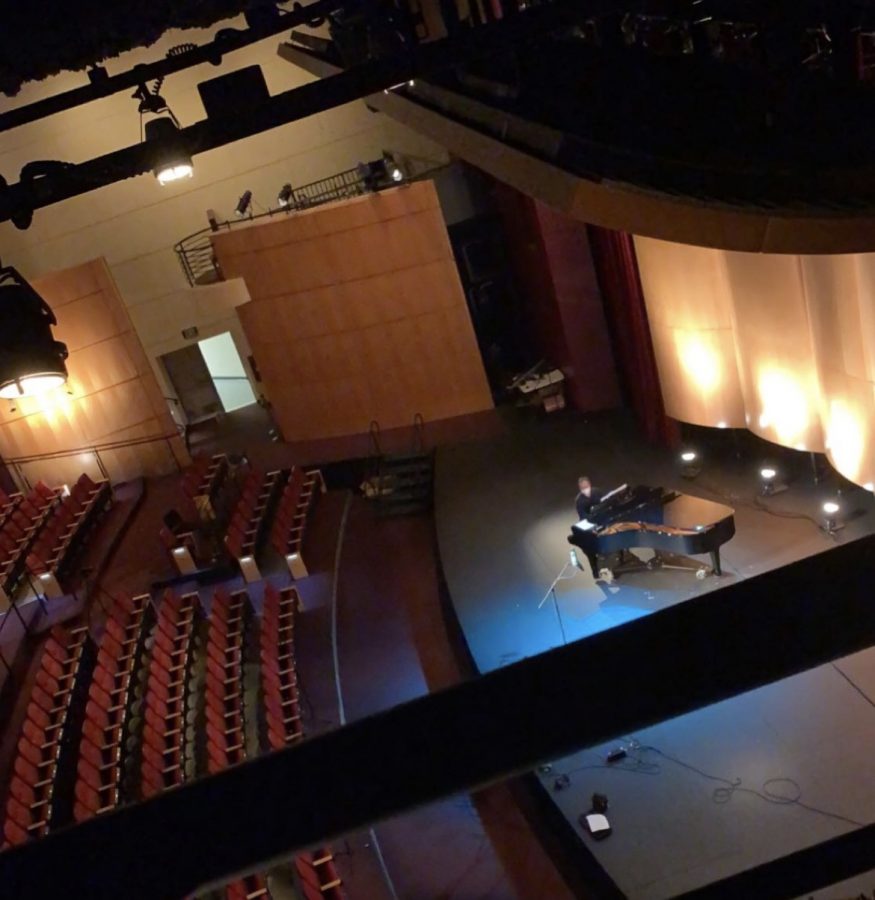 However, due to COVID-19, this year’s Vocal Solo Show was not a live show,unlike past years, with a large audience of students, faculty and family members in the Saperstein Theater. To give the performers a sense of normalcy, instead of the virtual performances we’d been seeing all year, the Performing Arts Department, students in the Advanced Stagecraft course, and an outside videography company filmed the show in the Saperstein Theater.

The 2021 Vocal Solo Show had 32 performers, with students in all three Middle School grades performing. The Vocal Solo Show was filmed over three days – May 8, May 15 and May 16 – and each performer was given an assigned date and time to come to the Middle School campus to film their performance. Once each performer arrived, they had three takes to film their performance – one which served as a lighting and sound test and two that served as performances for the video editors to use as footage in the final video.

Jeremy Pease, the Middle School Choral Director, has directed both past in-person HW shows and this year’s Vocal Solo Show and said it was great to have students back on stage.

“It was wonderful that we were able to utilize the incredible HW performing arts facilities for the first time in more than a year,” Pease said. “While there wasn’t a live audience, the students sang with Mr. Wong, our accompanist, in person on stage. Their performances have been professionally video and audio recorded, and we really look forward to sharing their hard work soon.”

“Honestly it was just so nice to hear all the singers again – it’s been such a difficult year, especially for music classes,” Schmall said. “Being able to have the singers come in and record their solos one by one on the stage was really a magical experience. They all did such a fantastic job as well! We are so proud of how hard they all worked to make such a great performance to round out the year.”

Elise Fried ’24, one of the performers in this year’s Vocal Solo Show, said that it was a joyful experience because it was her first time getting to be on stage and perform since quarantine began.

“After a year of not performing at all because of the pandemic, it was nice to be back on an actual stage and perform – regardless of if there was an audience or not,” Fried said.

Samuel Hines ’24, one of the performers in both last year and this year’s Vocal Solo Show, said while there were notable differences between this year’s performing experience when compared to last year’s, his time away from performing helped him grow.

“While performing at HW this year was a very different experience than performing last year, I feel like the time I spent away from the stage allowed me to climb out of a shell of any timidity and truly embrace the artist within it,” Hines said.

The Vocal Solo Show is still being edited, and it will soon be released to the community for viewing.