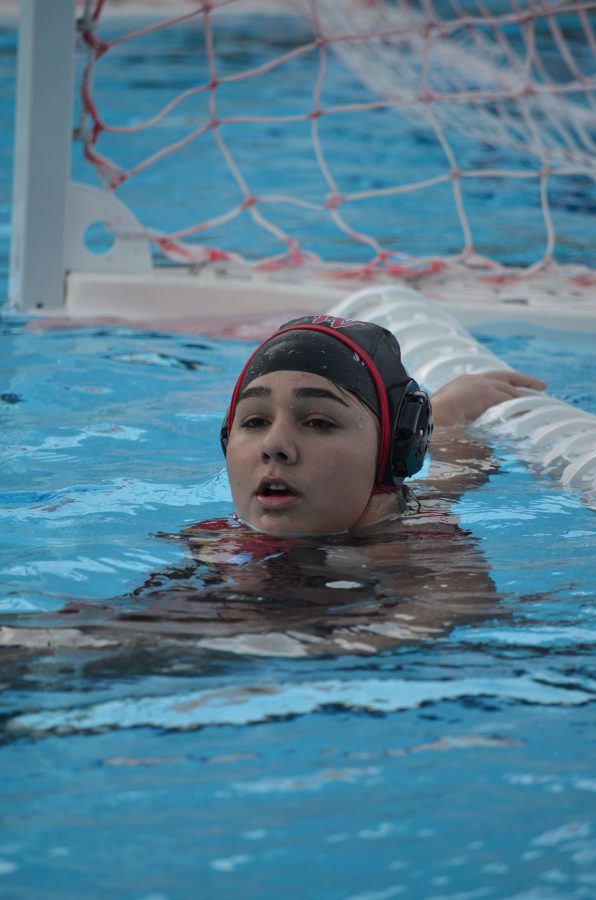 Taylor Lacour '19 defends the goal from the opponents. Credit: Uploaded with permission of Darlene Bible

The varsity girls’ water polo team currently has a record of 3-5. The team has not played any league games yet. They faced two tough Division one and two opponents in the losses. The Wolverines are in Division three, and they want to win league and move up to division two. Although they endured some tough losses, program head and coach Brian Flacks said she wishes to build a stronger foundation, and he found promise in the early games.
“So far it’s been really fun, and the girls are excited. We are working really hard as we are in the early stages of the season, so we are working on creating a positive, hardworking culture, and hopefully that breeds success,” Flacks said.
Flacks is joined by fellow coaches Emily Greenwood, Bella Gonzalez ‘12 and Matt Kubeck. The coaches said they were excited for the upcoming season with a wide range of freshmen to seniors, so they will try to play their strength in numbers to their advantage.
According to Flacks, the girls are having fun and bonding with the rest of the squad. Varsity athlete and swimmer Namlhun Jachung ‘20 said she is excited to build upon her swimming skills and learn more about water polo. While they are focused on bringing home a CIF championship, they have said the practices and the overall vibe of the team is positive and fun.
“All the girls are friends. Water polo is a team sport where we make sure that we do a lot of team activities, team bonding or have a sleepover. I look up to the seniors, they’re really good and they are super supportive. I’m excited for us to start playing league games,” Jachung said.
The team recently played in a tournament in San Luis Obispo. The team played two games on Friday and won one game and lost the other. They played three games on Saturday and had two losses and one win. The team showed great promise throughout this tournament, and they came together as a team to get two wins.
With varied grade levels comprising the team, there is a wide range of player experience. Returning player Emily Hilliard ‘19 said she is excited to work hard and see some results.
“I am really excited about all the new girls who have joined the team. It really increases our bond and our community as a team. I think we are all excited for being a contender for CIF this year,” Hilliard said.
The team played Marymount on Tuesday and won the game 14-1.